Dang! So I actually made use of this Hello World post for once. This blog is where I intend to file all the incoherent random shit that would bore the daylights out of my regular blog readers. If you want to be entertained, head on hover to my personal blog or even my geek blog if you are so inclined.

I’ve been meaning to launch this site for quite a while and was prompted to do so when I realised I needed somewhere to stash sentences I’m writing for my Norwegian course. I figured I’m better of posting them publicly so that people can slam my incoherent Norwegian babbling and fix all the errors for me before sending them off to my teacher for marking, hehe 😀 It’ll also make sure I store this stuff for prosperities sake. If by some miracle I do actually learn how to speak Norwegian, then it could be amusing to look back in a few years time and see how just far I have come. It may even be useful for similarly language deprived n00bs to gauge how long it’ll take them to go from incoherent babble to “mez speaks da Norwegain gud” standard.

Oh, and there will of course be other stuff on here too. The language lessons just prompted me to do it sooner rather than later. I’m often needing somewhere to stick stuff online and usually resort to things like pastebin instead, but will likely use this site for a lot of that stuff from now on instead.

Apparently a picture paints a thousand words, so here is one of me in a penguin outfit … 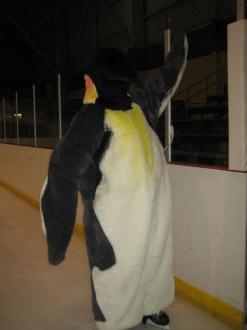